Hi. My name’s Marco Arturo, you can call me Marco. I’m a Mexican

12-year-old who is passionate for science. I was born in October 17, 2003 in Northeast Mexico. I entered school when I was two years old and learned to read at the age of three, which is when I started reading science books and encyclopedias. I quickly became incredibly interested in science, and I’ve changed my view on what I wanted to do when I grew up several times since I was three; a paleontologist, a biologist, a botanist, an astronomer, a physicist, a medical doctor, a chemist, etcetera. At the age of ten, when I wanted to become a physicist, I wrote and published a book on cosmology based on the work of several scientists like Hawking, Einstein, Newton, Galileo and many more. Not that the book was another copy-paste, no. It’s all my own words on a simplified version of my thoughts about their work and basically the work itself. Then I Googled who the youngest Mexican published author was. He was a decade older than me. I felt both proud and disappointed. I felt proud to know that I’m the youngest author in Mexican history, and disappointed because, well, Mexico had no other young authors. In case you’re interested about the book, you’ll have to wait a few more months until I publish the second edition, which I will also translate to the English language. 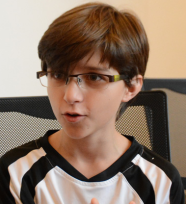 speeches to all kinds of events since I was two. I gave a speech to the president once, it was cool. I became known in both the scientific and the anti-science community because of a video I made about vaccines and autism. Go and watch it yourself, in case you haven’t yet, which is highly unlikely. The scientific community loves me, while the pseudoscience community hates me to death. But hey, when the people behind hundreds of years of scientific research love you, while the people who still believe that the Earth is flat and that contrails are poison hate you, you know you’re doing something right. I created this website because reasons. I like to write stuff, so you’ll get a variety of things from me. All the cool kids were writing blogs, so I thought I could join them as well.

In case you want to follow me on Facebook for some reason, make sure to visit my page:

And if you want to contact me formally, send an Email to:

8 thoughts on “About me”

Search for my stuff